The highlight of my life as a sports spectator came 24 years ago tonight, right about this time.  It was January 27, 1991, and my favorite team had just won the Super Bowl.  Yes, other favorite teams of mine had won championships during my lifetime – among them the ’88 Fighting Irish and the iconic ’86 Mets.  But from their seasons I had retained only hazy memories, the first light of fandom having just barely drawn open my eyes.  The timing of this team though, the 1990 New York Giants, was different.

They won it all when I was 10: old enough to absorb every detail I could about sports ; young enough to be totally smitten by them.  When it came to watching ballgames back then, to say the romance outweighed the cynicism is putting it mildly: I’m sure I was sure that the outcome of my every team’s every game had the power to alter the universe.  Yet as it turned out, the Giants victory in Super Bowl XXV actually did help change my life.  Because had they lost that night, had Buffalo succeeded in kicking a game winning field goal as time expired, the happy ending to my favorite football movie would have never been written.  In my mind, that season would not have been elevated to indelible ; to a bit of magic impervious to the passage of time, still glowing a dozen years later when I needed to submit a writing sample — “a football story…any football story you like” — with my first job application after college.

The piece I handed in was about the 1990 New York Giants.  My final draft included at least one factual error (can you spot it below?), so my memory wasn’t perfect.  But it was pure enough to inspire a few lines that showed some promise, I guess, and I got the job.

The bittersweetness of timing stems from how important it is relative to how much its beyond our control.  Had that Giants’ season been much later and I may not have been nearly as charmed by it ; any sooner and the memories it gave me would not have been so bright.  But having happened when they did, when I was 10, the Super Bowl XXV champions fell into a sweet spot strong enough to help springboard my career – one that ironically has brought me into professional contact with many of the men who helped produce that memorable season.

On a couple of those occasions I’ve mentioned to the relevant fella whose path I’d crossed that I was a fan way back when, though certainly never explained the entire journey.  But here now, I wish all of them a happy anniversary on their Super Bowl victory nearly a quarter century ago tonight, and offer a long overdue, circuitous thanks for giving this kid a story to tell. 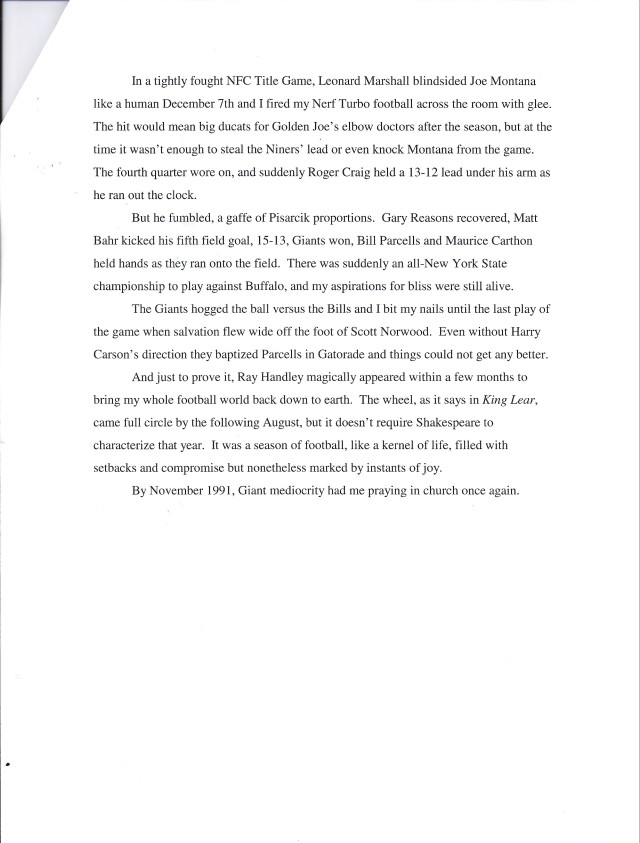 ORIGIN STORY – My writing sample that grew out of the Giants win in Super Bowl XXV.
Click on the pages to enlarge.

One thought on “24 YEARS AGO TONIGHT, or, How A Super Bowl Changed My Life”

This site uses Akismet to reduce spam. Learn how your comment data is processed.